Kris & Otto work the Flatwork Compass in preparation for their first Fly Chi Flow form. The Flatwork Compass features prominently in Team Movement as a traffic signal of sorts for larger scale play and transitions from the Big Game of long throws and flatwork patterns and the Inside Game with the dog on top of the handler.

The Flatwork Compass form creates a communication system that uses positional pressure, handler position, and disc placement to communicate Team Movement. Step forward and to the left, and we’re throwing Counter Clock Flank. Step in place and open up to the back and you’re communicating Pass.

The point for new players seems to be throwing and moving the dog in various directions, gaining the clock and counter releases and triggers, and getting your bearings in a 360º disc dog game with shapes and angles. And that is true.

But there is also another point, a more subtle point to the exercise, and that is to stop AND get set up & locked into position, quickly and efficiently with the dog coming in from various angles. In this session here, Kris & Otto are focused on communicating Stop and on getting set up cleanly.

Reading and Stopping the Dog

You can see that Kris is starting to read the dog much earlier. Predicting and cuing the Cued Drop is getting much easier, and Kris’ focus can be seen on Otto at 12-15 yards, with purposeful movement. That’s great. This is a HUGE part of the Flatwork Compass.

This stopping of the dog seems super lame. It’s so boring – just stop the dog each time, set up, cue and repeat – Yawn…

Within the Flatwork Compass form itself, and compared to other interior disc dog work and Team Movement, it is kind of boring, but it’s magic once you start using it while you’re moving around a bit.

The pushing action of the 1st two flanking throws in the form teach the dog to stay out and move with the handler. I get to choose when to do that and the dog learns to respond. The 2 Passing throws allow the handler to take ownership and control over the pass. Once you’re able to stop the dog cleanly and efficiently with the blocking action of Flatwork Compass it becomes a simple operation to use that ability to stop and turn it into a launching pad for Team Movement.

Up Next: Fly Chi Flow Forms 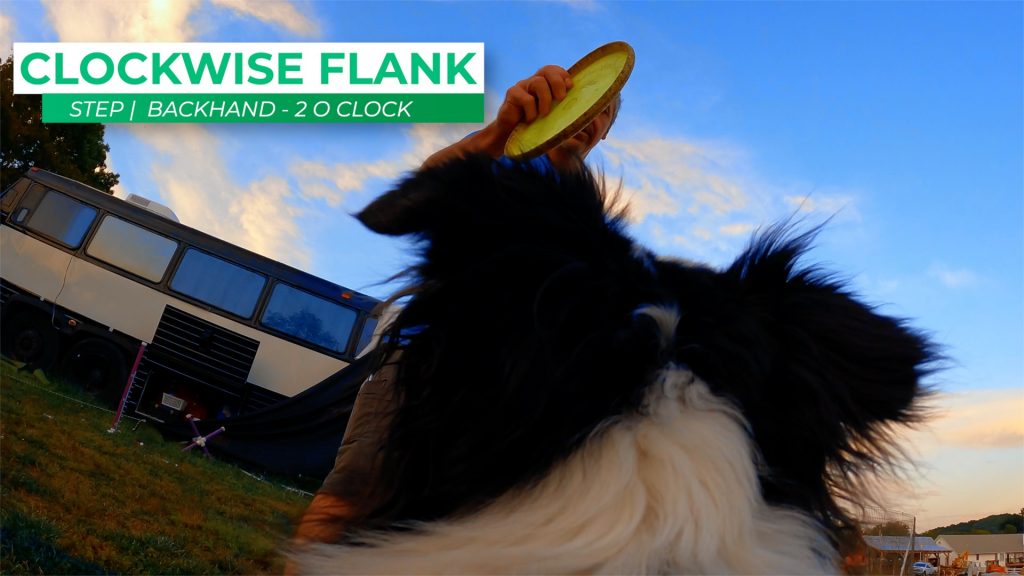 The Flatwork Compass, a Yellow Belt Disc Quan Do Form, a core principle and one of the Holy Trinity of Disc Quan Do forms.