This is a response to a post in a discussion on K9Athlete.com

Hint:In a small area, there is no room to run away. Biting and dropping happen in the same place. 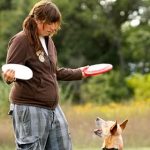 Unsolicited eye contact or Attention is a great way to hook up with a dog. If you have something the dog wants he should give eye contact in order to get access to, sit, release of a distraction, whatever and ask for a bite on the disc as reinforcement for that behavior. Reward the bite with vigorous resistance and letting the dog win. Ask for the drop, mark it and reinforce with a vigorous bite. Repeat

Every 20 seconds or as needed, after the dog wins the tug, dismiss 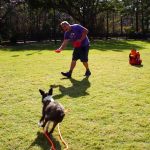 If a dog is dismissed, it means the handler is "off limits". Dismissal does not mean the dog has to leave, just that the handler is not available. Dismissal is a valuable drive and ignore your dog. “Alright… Go do dog stuff…” That’s right, send him off with the toy. 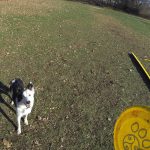 Waiting on cue and situationally is extremely important for disc dog freestyle training. The competition field might not see too much waiting going on as everything is supposed to be happening in flow, 30 seconds or until your dog brings the disc to you. if he happens to do that, cue the Drop and repeat 2 disc bitework.

The contrast between the dog doing their own thing and nothing really happening and playing a fun fast paced game with you will be stark and the dog can easily figure out what’s better for him. The decision to come in close to you will be made earlier and earlier until your dog never leaves in the first place.

Adding Value to the Handler

If your dog heads off and chews on the disc or whatever, ignore him for 30 seconds (perhaps longer if you’re really patient). If the chewing on the disc is a real problem, you can, at any time, mark a drop, any drop – doesn’t matter if the dog is only dropping it to bite again, or dropped it on accident. Reinforce with a bite on you.

If your dog comes back without the toy, who cares, we are adding value to the handler. Give 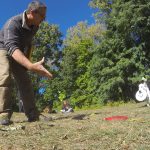 The Give is a retrieve to the hand. A cued Give is a foundational skill that is not super useful in the actual performance of disc dog freestyle, and has huge applications for them a bite, tug them over to the other toy, pick it up and work your way back to where you started, let him win and dismiss him.

If you have to wait the full 30 seconds, or whatever timeframe you’ve given this exercise, calmly walk over and pick up the disc. Then walk calmly to where you were playing and start anew by capturing a behavior you like and reinforcing it with the 2 disc bitework.

If this doesn’t work the first few times you try it, don’t sweat it. Eventually your dog is going to stop and look towards you before they leave the area or they’ll give you something nice that you can mark and reinforce with a bite on you.

Some real tough nuts can require more than 30 seconds, but that’s usually plenty of time to contrast the kick ass playing with you vs the ho hum biting and chewing. This takes on an entirely different dimension when you send them away and won’t play with them. It’s like their world flipped upside down.

This exercise is about teaching them that cooler things happen on you than out there. Out there, nothing special happens in here we ROCK!!! Once they realize that it’s half way over.

One of the really cool things about multiple target bitework is that the handler is able to own the drop. The drop can be asked for and reinforced at any time this makes it valuable in the game to both the dog and handler. It leads to either the reward or the next behavior or more play.

Reinforcing on the handler combined with a solid drop cue means that the dog is going to rapidly approach the handler with the disc in his mouth. He will not drop it because the drop makes the game work. Without the drop, nothing happens. Dropping early leads to a stoppage of the game. Better to just hold on to it… “When is he going to ask me to drop it?” The next thing you know, your dog’s right on top of you with the disc in his mouth. I know this sounds far fetched and magical, but I assure you it’s well grounded in reality.

If you can just predict when the dog is going to drop and ask for it before he does the deed, then you can mark and reinforce the dropping behavior. A key tenet of positive dog training is: It doesn’t matter why it happens, just that it’s happening. So what is happening is that the dog is dropping on cue and being reinforced well for the behavior. The dog learns that dropping on cue is what makes the game go round. The behavior has to happen on cue and be reinforced well – reward and repetition builds understanding.

The handler can prove that the drop makes it happen too. Once the dog is showing some understanding of dropping on cue… If the dog drops early? The handler can NRM it or disengage at that moment. The game dies a little bit and the energy starts to flow out of the game. The dog can be made to go pick up the disc or the handler can go do it, that’s not really that important. What is important is that the un-cued drop caused the energy level of the game to drop. That’s the lesson.

If you and your dog are constantly trying to learn this lesson then it’s a pretty safe bet that we should smack the handler:

If you do this then your dog cannot drop without your cue. Only after your dog has a history of success can you define a performance baseline and then up the criteria by bringing that drop point closer and closer to you.

It’s just a simple shaping exercise from that point on…

I also don’t mean to pick on any handlers here, I just know from experience that people can find all kinds of excuses for why they didn’t call the drop. This exercise cannot work without the handler Owning the Drop[/div]

Move to a Single Target

So far we’ve been talking about adding value to the handler and owning the drop with multiple targets.

Big deal, right? “Anybody can do that. How about 1 Disc?”

Well 2 discs is a big deal, actually. It allows us to create a monstrous rate of reinforcement and an ever more successful reward history and a love for biting and dropping stuff. These are our tools for transferring this to a single disc.

There are a couple of set ups here:

Once again, remember that the game is really fun and exciting for the dog when the dog is working well and it’s boring when the dog is screwing around. This is a really important factor in the game of disc in general, one that is not very well understood or applied. The dogs always get corrections adjustments and attention when they are screwing around. Most of the time they know what they’re supposed to do but they can’t do it because we’re all in their face about something that happened or didn’t happen 3 seconds ago. Capture and shape the good behaviors and ignore the bad.

You can also make the grass much greener on your side of the street while your pup is dismissed. You can toss discs to yourself, practice some team movements solo, sit down and hang out… the only thing that matters is that you do not try to get your dog to play with you. You are playing a better game, by yourself than your dog is. Aloof and cool is what we’re looking for her in terms of tone.

Be careful not to be too oafish, or clumsy in your communication. It’s really easy to use sledgehammer communication – crossing the arms and turning around abruptly, harumphing about, squealing, jumping about and clapping and such in reaction to our dog’s behavior.

This sledgehammer communication is very striking and can be quite powerful. But inappropriately used, it can become a caricature to the dog and lose it’s meaning. It can make it not meaningful or believable at all.

This clumsy communication is also ill suited for the kind of subtle ‘whatever, big deal…” kind of vybe that we’re sending out to the dog and we’re depending on that lowkey vybe to teach this lesson.

We can be very subtle in communicating our disposition with our dogs as far as high power verbal praise? Save that for really excellent behavior. Want to communicate your displeasure? A casual disengagement of the game or a look off can be quite enough to let them know how you feel.

And always remember that all communication needs to be consequent. It must be attached to a behavior either by a marker or by precise cause and effect.

One Skill at a Time

Make sure that you focus on one skill at a time. Adding value to the handler? Then the drop doesn’t really matter does it? Neither does a poor sit. Make a mental note of any problems you have and address them in a different training session.