Loot and Ron work on some new disc dog moves. Hat Tip to Yachi & Kosuke Hirai for the inspiration

The sequence is: Scoot to Screw Vault (Reverse Chest Vault) to something that I’m calling a Spinny Vault or a Spiffy Vault, a variation of the Japanese Dog Catch. It’s called a Screw Vault because the handler corkscrews into the vaulting position after or as the dog commits to a vaulting platform that has not yet been presented. Loot commits to the vault before the platform he will be flipping from is presented. The second vault, the Spiffy or Spinny Vault is aptly named, although you’ll have to wait ’til the end of the video to see it happen for real.

The Scoot is an excellent set up for this if the dog has a stable position at the finish of the Scoot.

Warming up to the Screw Vault, working some various positions. Reverse Back Vault and then kind of a half a Screw Vault. Perfectly thrown backhand tosses are used to keep Loot interested and successful while working up to the challenge of this crazy sequence.

A couple of repetitions of the sequence are done using the Art of Linking Tricks.

The tough thing here is holding position while maintaining a sense of timing. This trick is almost easier happening in flow without the wait after the Scoot, but it is quite important, especially on the Screw Vault, to make sure that position and timing are clearly defined and that dog and handler really are on the same page. This is a blind, moving, and spinning vault. It’s not at all easy.

At 0:35 seconds or so, you’ll notice that I look up and over to my right and put the disc up there and the vault is going left. This little cheater move helped Loot to hold position here. Just a little wrinkle in there to keep him honest. A bite or two to the same direction could be even more helpful if your dog drives or drifts out to the left while waiting.

This video took place over about a half our or so. We took a few breaks, like usual, after about 3-5 minutes of work. When we came back out to work, I didn’t want to pound more rebounds, I figured it might be nice to work on some leaping. The disc bag was handy, so I used it as an over obstacle.

It was a really nice tool to use, one that is available to all of us. I will be using it in the future.

I used flatwork, the Rear Cross in particular, to set Loot’s line for the leap over the bag. Notice how sharply that Rear Cross locks the dog down onto a straight line towards the handler. Loot has a monstrous outrun and that Rear Cross just locks him down in line with the handler.

I’m using a take on this skill because I’m looking to get a successful leaping catch and make it a habit. Throwing the disc on this skill might get in the way of creating that leaping habit. Takes allow the handler to always be perfect in terms of placement and timing which allows the dog to get better at committing to the leap, lifting up the legs, and executing the catch. 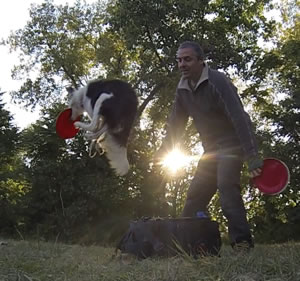 About 1/2 way through I started swinging an arm under him as he was leaping which is great for getting a dog to lift his feet up.

The whole leaping session I was working off the cued Drop. Each cued Drop led to a bite on the disc or the skill that puts him in position to bite the disc. Loot wasn’t jumping over a target to catch a disc, he was just going to get his cookie. Rewarding with Action is a great technique for creating desire and commitment when combined with the cued Drop.

Twisting and spinning can be difficult, especially when you have to put your feet or body in perfect position while spinning. In the beginning of this session, I’m working on spinning from my shoulders. Going over the top like I’m trying to do here can be more efficient than trying to go around while spinning. If I can lift my elbow high enough and drive it down behind me, I will spin much quicker and more efficiently with more balance than if I spin around like a top.

The foot placement can also be helpful with spinning. Turning the foot as far as possible on the step before stepping down on the ground with it enables the handler to move further and faster on each step.

The Spiffy Vault, the second vault in the sequence is not very spiffy in this section. It’s the easier of the vaults, and success and understanding are much more important than performance.

I do a little bit of freestyle jamming here to take the pressure off this challenging sequence and to get some success that we can leverage to finish the session strong. We’re going to go live speed. At 3:10, he was just a bit too close to me after the Screw Vault to execute the Spiffy Vault so I reset.

The next rep is a trainwreck and I got the idea that we were about tapped out in terms of energy so we finish in a flourish of freestyle.