The Flank is a position where the dog is out to the side of the handler. Flanking allows us to set up patterns that are not just towards and away from the handler.

Setting the Flank is the act of getting your dog out there, and usually consists of a little body language and a well placed disc.

It adds depth to the game of disc. If the dog is working the Flank, then more than 1 disc will be caught away from the handler. The game of disc changes from a game of chase and retrieve to catch and communicate. 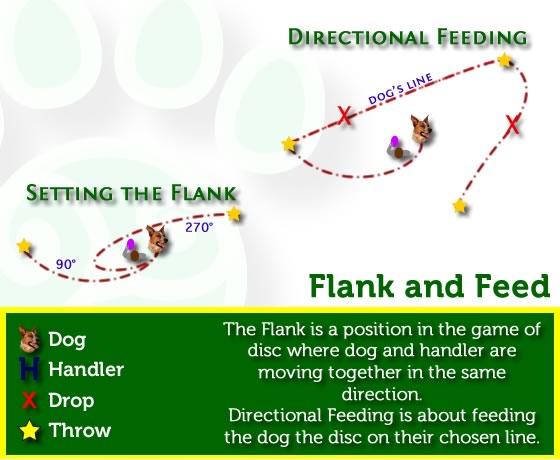 Directional Feeding is an incredible drill for dog and handler. What we do is to toss a disc to our dog, preferably on the Flank, and then ask for the drop. Once the drop happens we throw the disc to the dog on the line he has chosen.

The object of this throw is to place the disc so that our dog catches it on the run with a nice leap. That cannot happen if we throw it in the opposite direction that the dog is moving (Doh!), or throw it to a dog that is unprepared.

Directional Feeding allows us as handlers to learn what patterns our dog runs. It also gives handlers the opportunity to practice throwing to where the dog is going to be and to practice hitting our dogs on the run.

As far as the dog goes, Directional Feeding can be used to teach a drop on the run to teach them to value more than one disc at a time, both troublesome issues with dogs that have had a steady diet of throw and catch. Another thing this drill does very well is to teach the dog that performance of the behaviors the handler asks for earns the opportunity to play.

Directional feeding is the base level of Freestyle.