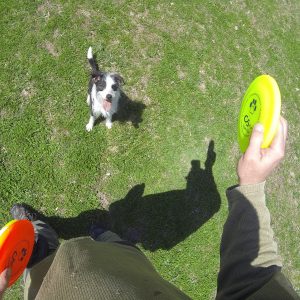 There is Always a Flank

If the handler has a toy, there is always a flank. It might be a small flank, but even a perfect front will have some bias.

Be it dog’s instinct, position, reward placement, the hand the toy is in, reward history, etc; if you have a toy, and are not throwing it at the moment, the dog will be on one flank or the other. The end.

Any angle exhibited by the dog can be interpreted and leveraged as a flank. Add some proper movement and this small bias quickly becomes a working flank.

Another way to look at this is “Which lead is the dog on?” If the dog is leading with his right foot, he is on a clockwise flank. Leading with the left foot? Counter clock.

Working against this subtle flank, or unintentionally cuing the wrong flank can cause the team trouble in flatwork, set up moves, and interior sequences. 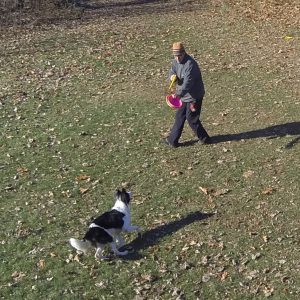 Lead Changes With the Handler

A dog’s lead leg changes depending on the direction of the flank. On the clockwise flank, the right leg is reaching out in front. On the counter clock flank, the left leg is the lead leg. The lead leg is the inside leg of the dog, or the leg closest to the handler.

The lead leg is a standard directional bias of 4 legged critters. The front leg of the inside of the turn is the one that reaches out in front of the dog first.

It is common understanding that the disc changes the dog’s direction and therefore the lead leg. That is flatwork. But it is not well known in the disc world that this basic directional bias of dogs is not only based upon the disc, but upon the handler as well.

The position of the handler’s feet, a throwing pose, movement, bent legs, or leaning, all can and do affect the dog’s lead.

Purposeful manipulation and of the lead and working flank with consistent cuing by the handler is a key skill for disc dog freestyle.

The dog’s lead (and working direction) is chosen by the handler.

A simple way to remember which flank is which is to remember that clockwise is left to right.

If your dog is moving left to right, in front of you, then it is a clockwise flank.

If the dog is turning to his right, it is a clockwise flank.

A simple way to remember which flank is which is to remember that counter clockwise goes right to left.

If your dog is moving right to left, in front of you, then it is a counter clockwise flank.

If the dog is turning to his left, it is a counter clockwise flank.

Almost all dogs have a directional preference in their movement. It’s like hand dominance in humans, or the dominant foot for skating. This preference might be very small and almost imperceptible, but a “perfectly balanced” dog is a rare find indeed.

If a disc is thrown out on the clockwise flank, out to the right, the strongly counter biased dog will peel off, to the left and away from the handler. The dog wants to work on his strong flank.

If your dog is peeling off on the Around the World to run in the other direction, then you probably are running on the dog’s weak flank. Switch to the strong flank for your Around the World and you should get nice smooth movement. 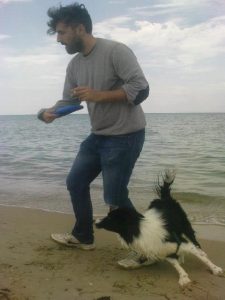 Standing with the left foot forward is a cue for the clockwise flank.

There are many other variables in disc dog freestyle that will communicate direction, but the handler’s feet is one of the stronger directional cues.

If the handler’s left foot is forward, the plane of the handler’s body is turned clockwise. This creates clockwise pressure as the dog tries to remain in front of or otherwise connected to the handler.

Standing with the right foot forward is a cue for the counter clockwise flank.

There are many other variables in disc dog freestyle that will communicate direction, but the handler’s feet is one of the stronger directional cues.

Changing stances from clockwise to counter clockwise can and often does change the flank especially a working flank. It’s essentially the footwork for a front cross.

This should be elemental, and common knowledge, but unfortunately it’s not. Many people are getting beat up by this unacknowledged truth in set up moves, interior moves, and practical flatwork.

It is best to set the working flank early, preferably while the dog is engaged in the act of catching.

If the dog is allowed to return most of the way to the handler before a flank is declared it might take a while to get the lead changed and the dog might run past the handler or otherwise break the flatwork pattern.

Opposite Flank Repels the Dog

In a Zig Zag, the successful handler switches stances for each throw, opposing the flank of the dog each time. This stance adjustment is more than just foot placement for a throw. The opposite stance exerts pressure on the dog to stay out on the flank.

After the catch is made on the right, the handler shifts to put the left foot forward, cuing the clockwise flank with the legs while preparing for the 2nd throw of the zig zag to the now counter clock moving dog (right to left).

If the handler uses a counter clockwise stance after the clockwise throw to the right, then the dog will be pulled too sharply towards the handler altering the zig zag line, and perhaps setting up a clockwise “shortcut” to the working side of the field.

Using the wrong stance in a set up move or a crossing situation is not at all helpful, and is often the root of set up and crossing problems, “dishonest” dogs, and miscommunication. 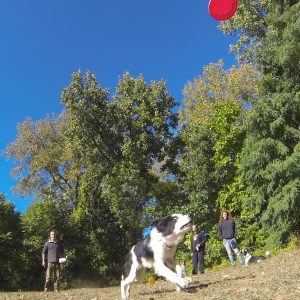 Throws that spin clockwise need to be thrown to the clockwise flank, or out to the right of the handler.

Throwing a disc in the opposite direction of it’s spin will often be difficult to manage, physically, due to the mechanical requirements of generating the spin and the confines of the handler’s body.

Throwing a disc in the opposite direction of it’s spin will often be difficult to manage, physically, due to the mechanical requirements of generating the spin and the confines of the handler’s body.

Opposite Spins Will be Blind

Throws made with a spin that opposes the flank will most likely be blind.

There are some throws and creative handler movements that facilitate quality throwing of these oppositional spins, but these throws often have huge blindspots. Blind throws and throws with blindspots can make the easiest of catch fairly difficult.