dogs leaping over handlers is part of playing disc. when the dog leaps over the handler’s leg it is a Leg Over.

knowing how to jump over something is a huge benefit. target placement will throw all of that knowledge out of whack, but it’s important foundation.

The agility set point drill is a great starting point for leaping. Proper understanding of these terms will help you and your dog with leaping, but it’s not really the same sport.

That round back, head down during collection? Not going to happen if the target is over the dog’s head. Creating and maintaining speed as method of operation? Not at all important in the game of disc. The foundation is wonderful, but the rules and mechanics are a bit different. 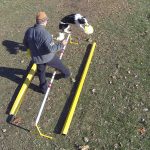 place the target in between the handler and the dog at maximum leaping height. placing the disc in front of the handler does not allow for touching the obstacle.

One of the problems that handlers encounter is that the presentation of the disc totally overwhelms their dog and the dog loses sight of everything else. If you place your disc properly, this becomes a moot point.

Place your disc about a half a meter or so in front of your leg, between you and your running dog at their maximum leaping height and they cannot touch the obstacle, as the trajectory required for catching the disc makes hitting the leg impossible. Make them leap early for the disc and high enough so the obstacle becomes a non issue.

Toss It Towards the Dog

push your over toss just a bit towards the dog. it will help them to stay back and leap early giving them more time and control to navigate the obstacle.

In addition to putting the disc in front of the obstacle at maximum leaping height, delivering the disc towards the dog (½ to 1M) forces them to leap early and helps them to understand that getting underneath discs before leaping is not a successful tactic.

This is a huge leaping skill. Most problems with leaping and catching come from the dog being too aggressive and overpursuing. The dog runs too fast and too hard and overpursues the disc. They realize they have missed so they make a last ditch effort, ripping up the head and leaving the rear legs dragging.

Flag & Flash the Over to Raise the Rear End

if you give your dog a nice high target and drive it down after the commitment to the target, the dog’s rear end will come up as their head goes down to track the disc.

Setting a nice over the leg target (in front of your leg – between you and your dog) and then driving it down is a nifty way to get your dog’s rear end up. It’s pretty much a Flag and Flash over.

When the head goes down to track the downward flashing disc, physics takes over and the rear end comes up. Pulling the head down = rear end up – can’t argue with physics.

This technique does have it’s issues. Because the target stays on the handler, the dog tends to try to focus on that object after the leap, turning a nice straight line over into a curving mess. Use this sparingly and/or follow the move immediately by a roller or throw to let Reward PlacementThe dog puts his face where the Cookie or the disc happens. Where you put the reward matters. Reward Placement is huge in disc dog freestyle. Your dog’s face will always wind up keep that line straight.