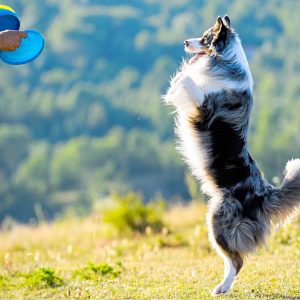 Many times these sequences feature the dog in front of the handler catching very short tosses. But they can also be long tosses, or flips.

Three to five tosses in rapid fire succession within a one to two second timeframe can be considered a multiple sequence.

Remember to take the discs from the bottom of the stack.