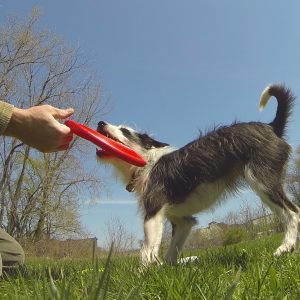 The dead fish tug is just a super boring game of  tug from your dog’s perspective.

It takes two to tug on something.

Tugging is only fun if the other side plays the game. If the handler refuses to engage the tug ceases to be exciting. Then the dog drops the disc.

Purposefully create a stark contrast between a healthy vigorous tug that ends in the dog winning the toy and a boring lame tug where the handler never really engages. Just put enough pressure on the toy to hold it. Hook a finger under the collar if he is too aggressive and leave the toy boring and slack while the dog tugs vigorously. Hooking the collar enables the handler to keep a very loose and lame grip on the disc.

If the handler pulls or puts any kind of load on the disc, the dog might perceive opportunity. Be a lame tugging partner, like a dead fish, and the dog will be happy to get spit that toy out.