A duration behavior is a Stay; whether it is sitting, lying down, standing on hinds, sitting pretty, or a handstand the dog and handler both know that the behavior is to be held until the release cue.

Duration behaviors have a beginning and an end. The beginning is cued and the end is cued with a Release cue. These are both actions or behaviors. The middle of the skill is no behavior at all – holding position is an absence of behavior.

The ‘end’ part is critical. If there is no clear ending of the behavior then the dog doesn’t know it is a duration behavior and the duration part of the skill will be shaky. The dog will not know how long to hold the skill and will be likely to disengage from the skill on his or her own or contextually.

The easiest way to get a solid duration behavior is to release your dog early and often with your release cue and reinforce that release liberally.

When the dog learns that the cued Release from the behavior is what pays then the dog will “stay” there until the release cue. This plays on the back chain concept and is a powerful method for gaining duration.

A dog who wants to do a skill is more likely to do the skill. Creating desire within the dog to do your duration behavior reinforces the likelihood that the dog will hold the skill until released and gives the handler more flexibility to generalize the skill and create a stronger understanding of what is expected.

While you can solely rely on the release from the skill to create your duration, it might not be the best way to create desire. It totally can be done this way but it’s a sneaky technique that requires complete buy in by the handler and clear and consistent handling to create the desire for the dog to make it to the finish. It also can be tough for disc dog skills.

Within disc dog skills, the dog will be juggling multiple behaviors and will be taking multiple “cookies”. A Juggle or a Shuffle in a Back Stall or while standing on hinds, for instance will ask the dog to hold the duration behavior through multiple “cookies”. If there is no desire to hold the behavior through the release or no experience getting multiple cookies during the duration behavior, the skill is likely to fail when a disc is delivered.

Building desire for duration with multiple cookies is a function of Math. Paying the dog at a rate of reinforcement that is guaranteed to keep them in the behavior through the end is key.

Paying the dog at a rate of reinforcement that guarantees the behavior is held rapidly adds value and reinforces holding the behavior through the Release cue while giving them practice at taking multiple cookies.

Stay is an Absence of Behavior

Doing the thing and assuming the position is beginning the the duration behavior. While the dog is in position, they are not doing anything – the Stay is an absence of behavior.

If the dog gets the idea that they are doing something during the duration behavior you will get lots of superstitious behavior. If you mark every time you deliver a cookie, you tell the dog they have done something. Clicker savvy dogs will try to figure out exactly what behavior they are doing that made the cookie happen.

Heel is a moving Duration behavior. The dog holds position until released. If you’re not releasing your dog from Heel, you don’t have Heel as a Duration behavior and your dog is not likely to hold Heel until your Release cue.

If you want your dog to hold the Heel position, learn to release him or her early and often and pay it well. You can also add value on critical moments of the skill like on every left footfall, drawing attention to the positional relationship between the dog and the leg while keeping the rate of reinforcement at a level that is guaranteed to keep the dog into position.

Ron Watson discusses the disc dog Multiple trick in Freestyle, laying out some definitions and keys to the trick. 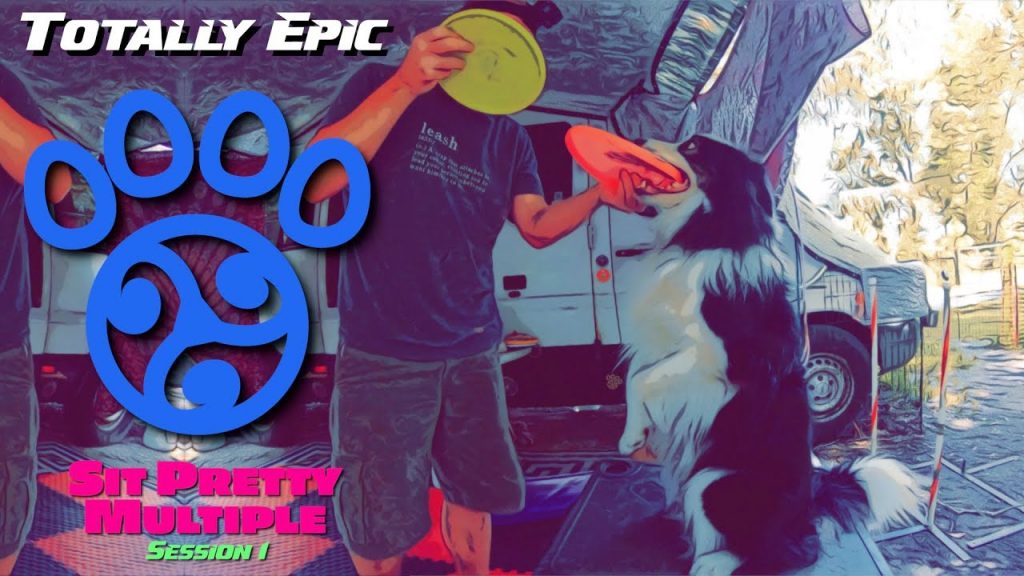 Ron & Epic work on a Mutliple/Juggle in the Sit Pretty position.

What Is a Duration Behavior?