Paying the Release as we have been during this class is often a contentious issue for dog trainers.

As far as we’re concerned here at Pawsitive Vybe, “Duration is defined by the Release.” Duration has both a beginning and an end, that’s what the word means. If you don’t have control over the Release, you don’t have duration, it’s as simple as that.

I think the issue of whether or not to pay comes up based upon what the handler perceive the duration behavior to be. Is it a chore, duty or obligation? Or is it an fun, play, and opportunity?

If it is an obligation or duty, the handler is reluctant to reinforce the release because they don’t want too much value placed upon the release, as it is already self reinforcing and adding cookies could make the dog not want to stay. The allure of freedom is already too much of a distraction.

When your dog believes that duration behaviors are an opportunity, they don’t like to get up. If they don’t Release on cue, they do not understand duration. Paying the Release is important to help deliver the duration concept to your dog.

It’s a different mindset as a trainer and requires reframing the idea of Duration from Obligation to Opportunity. Once we have that viewpoint, that duration behaviors are an opportunity, paying the Release seems natural.

When the Release is cued and paid, it becomes a trick in and of itself. Do it on cue and get a cookie. Do it without the cue and get nothing. You can’t be Released if you’re not doing the duration behavior. Probably best to do it.

Paying the Release forces interaction with the handler. The dog will learn to look to the handler for reinforcement after a release. You want your dog to want to interact with you after the Release, not the environment. You can pay the dog with a tossed cookie if you want them to go somewhere else or you can reinforce on us with a cookie. Remember that “a cookie” is any resource the dog finds valuable and that regardless of where we reward the dog, the dog is being conditioned to interact with the handler after the Release through marking and reinforcement.

The thing is… the Release is going to happen regardless of whether or not you pay it. Might as well reinforce it and leverage it towards strengthening your duration behavior.

Once the dogs understand and believe in the Release we can start to variably reinforce it. We can also Reward with Action if we’d like…

We have the Working Dog, the dog holding the duration behavior and a Distraction Dog(s) that is doing stuff.

Set Position When we set the working dog on their Spot or Pedestal, it would be a good idea to use a very high rate…

Many clicker trainers have problems with duration because they are primarily focused on marking and reinforcing action. After the action part of the duration behavior has been performed there is really nothing left to mark. 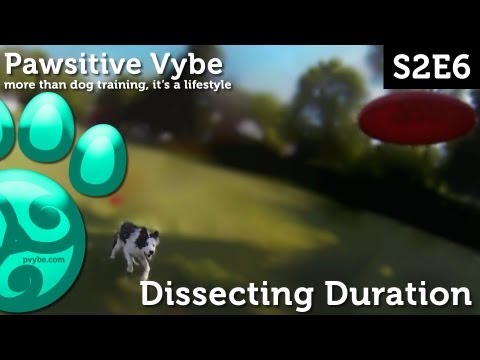 Duration Behaviors are behaviors that happen for an extended period of time. A Down Stay is a duration behavior, as is chilling out on a pedestal, prolonged Attention, a lingering nose or foot Target, and working a Threshold.

Behaviors can be broken down into many root concepts. Spot training offers us several active root concepts that we can teach our dogs that will come in handy in other situations.

Getting a handle on a high drive dog’s movement on the disc dog field is tough. Flatwork is a tool that can be used…