Being ahead of the dog is the key to flow and control, and being in front of the dog on interior moves requires fast, purposeful movement. Watching the dog or being caught on your heels is not an option. This form creates a habit out of moving immediately, with purpose and being prepared for the next move before you’re done moving. Making a habit of this kind of movement makes being ahead of the dog much easier leading to greater control and enhanced flow.

This IS Interior Team Movement

In the video at 0:31 and 1:12 there is an overlay that shows the overlap in movement on a couple of standard interior sequence moves.

Moving while the dog is in the air or navigating a catch is the only way to get in front of the dog and to be prepared before the next move will happen. Loading the next disc into the hand during the previous move is also key to being prepared for the next move. The habitual ability to move both right or left, clock or counter, while the dog is in the air or navigating the catch is a requirement for interior Team MovementTeam Movement is how dog and handler move, as a team, out there on the field. It is a judging category in some organizations and certainly is a focus of many judges, players,. 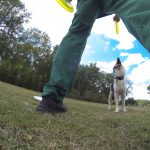 The handler's stance is important. There are many ways to stand and each way you stand can say a different thing. Stances communicate pressure and direction. Switching stances sends information to the dog.  Shifting form develops these skills, foundationally. These movements are how all the bad ass jammers move and preempt the dog’s next move. This IS the essence of Team Movement.

The Squared Stance Shifting form makes both clock and counter movement, to the left or to the right, habitual, instantaneous operations that are easily adjusted towards your sequencing needs.

It is one thing to be in position, and another to be prepared in position.

While moving, practice loading the disc. The next disc should be loaded before you get where you’re going so you can set your position the moment you get there.

As soon as the first disc is thrown, move the stack of discs towards your throwing hand and grab the bottom disc. It’s not a problem at all to move and load discs at the same time… IF you practice it. Make this preemptive loading a habit and it will be a habit. You will always be ready for the next move before the dog.

The 90 degree move around the Klimb table or around any decently scaled obstacle can be a bit of a stretch. It is most likely further than you feel comfortable moving in normal fashion. While this is true, it is not the whole story.

“Normal fashion” is the key term here. Moving normally is not what you’re doing. You’re moving to where you need to be and moving with purpose. This is not normal movement. 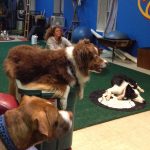 Spot is a “go to a place”, or “go to a mat” behavior. This means that the dog seeks out and performs a duration behavior on a spot of the handler’s choosing. A is a nifty bit of athleticism that does not come standard in normal movement. It is not hard, but it needs to be practiced, exercised, and experienced.

Turning the heel on the moving foot to reach for position will add another 45-60 degrees of rotation. That extra rotation will save a step or two when you get to your desired location and will allow you to go much further than normal movement.

Adding a little turn of the planted foot extends both the rotation and reach as well, as illustrated in the video.

Locking Down With a Stance Shift

The finish of this movement is a Stance Shift. The foot that reaches moves in one direction, hits the ground, then the trailing foot that was planted slides on over and back just like a Stance Shift from the Stance Shifting Form.

Execute the Stance Shift properly with a pre-loaded disc and the dog is sucked into the position of your choosing as soon as you make it to your destination.

This form is much easier done if you have the component skills installed. All of the skills required for this, save the heel toe movement, are exercised and made habit in White and Yellow Belt Disc Quan Do forms. This is what those forms are for.

In addition to developing a strong, flexible foundation for these movements for the handler, the Yellow Belt Flatwork Compass 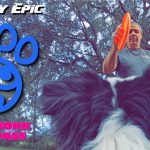 The Flatwork Compass is a disc dog form that separates the Flank from the Pass, creates a reliable trigger, and exposes the team to all of the key elements of Team Movement. https://www.youtube.com/watch?v=xW7Czz-7ows&list=PL8zWXaJfi1-synGOkBJ7u4p-WkotsL3LR and Balanced Position Form instills habit and function into both the dog and the team, so when you get to where you are going, the dog will respond properly and lock into position, waiting for the proper trigger to respond.

Here is an excerpt from Disc Quan Do class that lays out the connections between the White and Yellow Belt forms and this new movement in depth: