Pattern training is an important concept in dog training and dog sports. It fosters understanding of the skills required and also creates muscle memory. Another thing that is equally important is isolation of skills.

We’ve been pattern training over the course of this class. The Set Up Move and Flatwork Drills, as laid out inThree 5 Minute Sessions for All Your Set Up Moves, was Pattern Training. The idea behind these drills is to create clarity on the criteria by repeating them in groups of 3 and to provide clear contrast between similar skills. Not many people stick to the pattern, as it’s boring (I was like that..), but if you stick to the pattern, isolate the skills and repeat them, the concept of the skill becomes clear and the repetitive performance of the skill builds muscle memory. After that, the skill becomes habit and it becomes very hard to step outside of that pattern.

We pattern train many things here at Pawsitive Vybe, but probably the most important pattern for the game of disc is Step, Step Collect… Jump!. 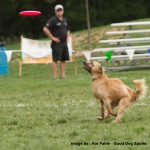 The act of preparing for a leap. Breaking stride for leaping or changing direction, collection is a key moment in the leaping process.  More is the moment that the dog switches from running to leaping. The rear legs come forward, underneath the dog, sometimes almost to the chin. The dog’s body rocks back, kind of a squat, coiling up in order to spring. The head rises up and sets the trajectory of the jump. Collection is the most important part of leaping and yet it’s not often isolated or pattern trained in the game of disc dog freestyle.

The typical disc dog Pattern is to go around, run like heck and snatch the disc at 20 plus yards. Disc placement at that distance is erratic, timing is neither critical nor precise, and the dog winds up moving too fast to collect and jump. This works for the dog. Over 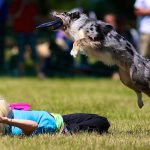 An Over is any leaping catch that happens over top of the handler’s body. Overs are usually named by the part of the body over which the dog flies, i.e - Leg Over, and over, it works. It becomes the pattern that disc dogs run. Unfortunately for the handler and for the team at the competitive level, this pattern is terrible for reliable and big leaping.

It’s like trying to dunk a basketball while sprinting down court. It can’t be done. The ball player must break down and collect – Step, Step, Collect, Jump! in order to successfully stuff the hand with the ball in it, into the rim. Basketball players spend their childhoods and a good portion of their life, in practice and in play, working on this skill. Collection becomes muscle memory, and as a result of that lifetime of practice, Collection becomes habit. It’s part of the game. Even so, if the ball player is sprinting too hard at the 3 point line, odds are he cannot make the collection required for the big leaping dunk. He’ll have to settle for the layup.

Head Down or Head’s Up

When dogs take off after prey, I mean really take off after prey, their heads go down. We call this a head down gallop. The head down gallop is go, period! Like the sprinting basketball player, it’s very difficult to move from a full blown sprint to a quality collection for big leaping. Some athletes can do it, but few have the athletic skills to make that happen. Given that the pattern for most disc dogs is run like heck until you can bite the disc, not only do most dogs not have the athletic skills, but they don’t even have the concept, let alone the practice. They’re like 1950s era basketball players, they’re playing a different sport.

A slower, more sensible gallop to the target is what we’re looking for. A head’s up gallop, a fast and aggressive but not overly committed approach to the disc. This head’s up gallop is required for a dog to be able to quickly and efficiently Collect and leap.

Send the dog around and throw a very short floating disc – 7-10 yards max. This short throw will keep the dog from going into that head down gallop and promote early collection. This short throw is also easy for the handler to deliver with precision and accuracy, meaning that the disc can be in the correct place to elicit a leap nearly every time. This kind of consistency is required to help a dog learn how to approach a disc and to leap properly to catch it.

Absent this consistency it’s a hit or miss proposition; only the special athletes, the Michael Jordan’s, the Ken Griffey, Jrs’ or the Barry Sanders’ of the Disc Dog world will leap at, or close to, their full potential.

These short floaters are a staple of our work with disc dogs here at Pawsitive Vybe. We warm up with this, practice this as a skill in and of itself, and we slip it into the game very frequently. Step, Step, Collect… Jump! becomes muscle memory for our dogs.

Once the dog understands this concept, start to generalize it. Zig Zags and AroundAn Around, or a Go Around is the traditional disc dog set up move. The dog goes around the handler’s body in a clockwise or counter clockwise fashion allowing dog and handler to the Worlds have this concept embedded into them. Try to avoid the head down gallop by keeping the disc from getting too far out in front of the dog and by keeping things short most of the time, until the head down gallop is no longer the goto behavior. Then start to stretch it out and generalize and proof the new pattern.