There is No Flick

The Flick Myth is totally in effect here. The arm starts at 0% speed/power to 100% speed/power over the course of the discs’ arc around the body during throw. The last moment the shoulder is closed to the target is the last spot where speed and power are 100%. The moment the shoulder starts to move from closed to open the speed and power rapidly decreases to 0% as the arm is moving to the side and no longer moving towards the target. The closed should creates a bottom out point, and serves to set the flick.

As the arm gets out away from you, out to the side, an extreme open shoulder, the wrist and thumb start to roll up. This, combined with the over stable nature of most dog discs really forces an extreme right curve. A sharp and aggressive right curve is almost always caused by an open shoulder.

Power is Going Where?

If you look at Laura in the video, it’s especially apparent in slow motion, her power is nearly totally oriented out to her right. That’s where the stick is really cranking towards. It’s quite easy to see with this big lever. She’s putting far more power and emphasis out to the side than towards the target.

It is very important to understand that there will still be a follow through. The arm will continue to fly up and out to the side after the closed shoulder has been hit and the disc pops out. What very frequently happens when the thrower is given this closed shoulder instruction, is that the thrower tries to stop the shoulder on his or her own, at the moment it’s moving from closed to open. This creates a very weak stop, and only serves to remove power.

Drive to that bottom out point, to the last moment of the closed shoulder, let the disc pop out of it’s own accord, and go ahead and let the arm continue on around as it will.

We do two distance learning drills here at PVybe designed to isolate portions of the body that are moving in concert on your big back hand throws.

The Backhand throw, especially when thrown for distance, is one of the most complex throws you can attempt. 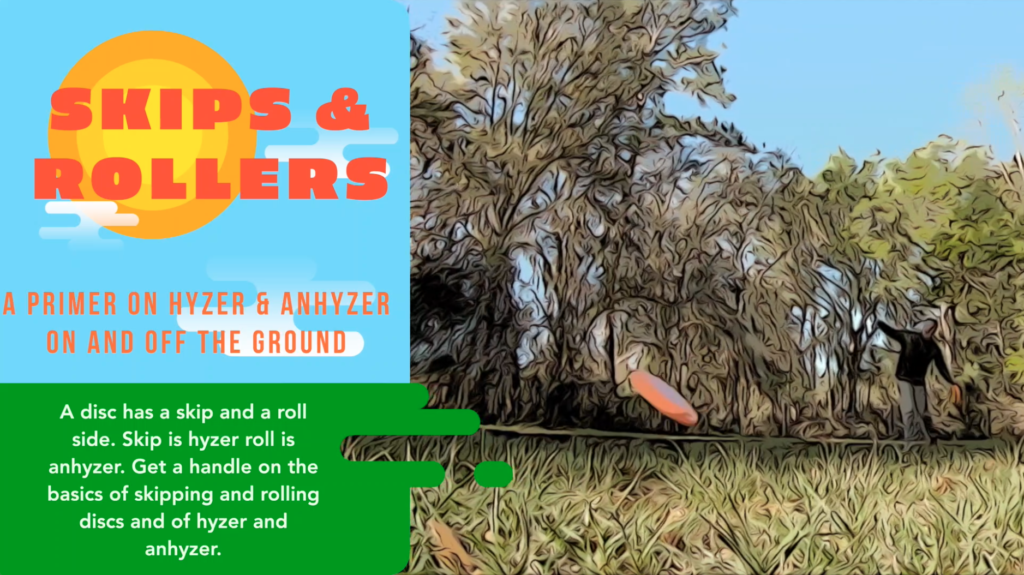 The ability to skip and roll a disc is the essence of control over the wing angle of a disc. A thrown disc has both a skip and roll side. The skip side is hyzer, the roll side is anhyzer.

Ron Watson teaches the freestyle flying disc throw, the Flamingo. The Flamingo is a flashy, under the leg throw with a twist.

We are going to backchain this skill. You’ll start with a very simple, rough approximation of the finish product – a blind backwards release – and then you will increase the challenge to get to that finish criteria.

One of the hardest things to do while throwing discs is to relax. It is surprising how tense your arm and wrist are even when you think you are being relaxed.

Throwing Discs with Power and Consistency | Keep a Closed Shoulder