What is a Fish

A Fish is a move where the handler tosses a disc to a flying dog and removes from the dog’s mouth before he hits the ground. It’s a great skill for routine building and creating and maintaining Flow. Another way to think of the Fish is a “Flying Give”.

This skill can be used all over the place to improve disc management and to help build dynamic, flowing sequences with less discs than tricks. Some variations include: Behind the Back Fish (Hat Tip to Todd Duncan & Levi), a Flying Retrieve, and a Reverse Vault Fish.

This skill can be seen used extensively in Kimo Kai’s Flying Circus and in a bunch of Rokalele Videos.

Take a look at how the dog flips. On almost all flips, he is going to be relatively close to the handler. The exception is a large back flip – where the dog really travels away from the handler. Gainer flips are great for working a Fish.

People are often freaked out by the technical aspects of the Fish. “Oh, I could never do that!”

Watch the video, it really isn’t that hard. The disc is moving relatively slow due to the dog turning over during the flip and it’s most often right there in front of your face. It’s moving pretty slow too. You can do it!

In the video, the next disc, the Roller, is being thrown before the dog releases the disc. By pairing the hand touching the disc (or resistance on the disc) with the opportunity of the Roller it is possible to reinforce the drop. This is classical conditioning and is super powerful stuff. When the dog believes that sharing the disc means a Roller or Bite will happen right in their face, a Drop is kind of a no brainer.

Apryl demonstrates an additional layer of splitting of the criteria with Kiva by not even grabbing the disc, she’s pairing the catch with the Roller – classically conditioning Kiva to expect another disc after a catch. We can see that initially, Kiva is not so hot on the roller, but this frees up rather quickly and he’s killing that roller in just a few reps. Now Apryl can successfully integrate the grabbing of the disc to the skill.

This is not necessary with all dogs but probably should be mentioned. For most dogs and handlers, grabbing the disc and firing out the roller will work just fine.

When the dog is giving the disc up reliably, go on and Get Consequent.

Once the dog believes that Hand on the Disc = Roller and is readily leaving the disc in hand to chase the Roller, make the offered Drop of the first disc, a requirement for the roller to happen.

Once your hand on the disc, do nothing. Be as slack and as lame as possible. When the dog drops, fire out your roller. If the dog doesn’t drop during the pause? There is not enough paired value — back up and Go Classical.

At this time the dog is learning that the Drop makes the roller happen. Don’t cue it yet. Don’t add the cue until the dog is using the drop to make the next disc happen and the Fish is 100% successful.

Drop the Cue | Use a Paired Prompt Switch

Once the behavior is 100% and the dog knows that the teeth off or Give makes the roller happen, go ahead and add the cue.

It is likely that when adding the cue the dog will balk on the release of the first disc. Don’t sweat it. Just hang out a moment, let that roller continue to run away from him. He’ll drop it.

Be proactive and go back through the learning process inserting the verbal cue. Go Classical to be safe and use a simple Prompt Switch (New Cue followed by Old Cue). About 1 second before putting the hand on the disc (that’s the Old Cue), give the New Cue (mine is Fish!). Go Classical and pair the roller with the hand touching the disc to ensure success. Once that’s reliable, then Get Consequent.

Dropping the cue this way allows you to get 100% compliance with the Fish from the very beginning. 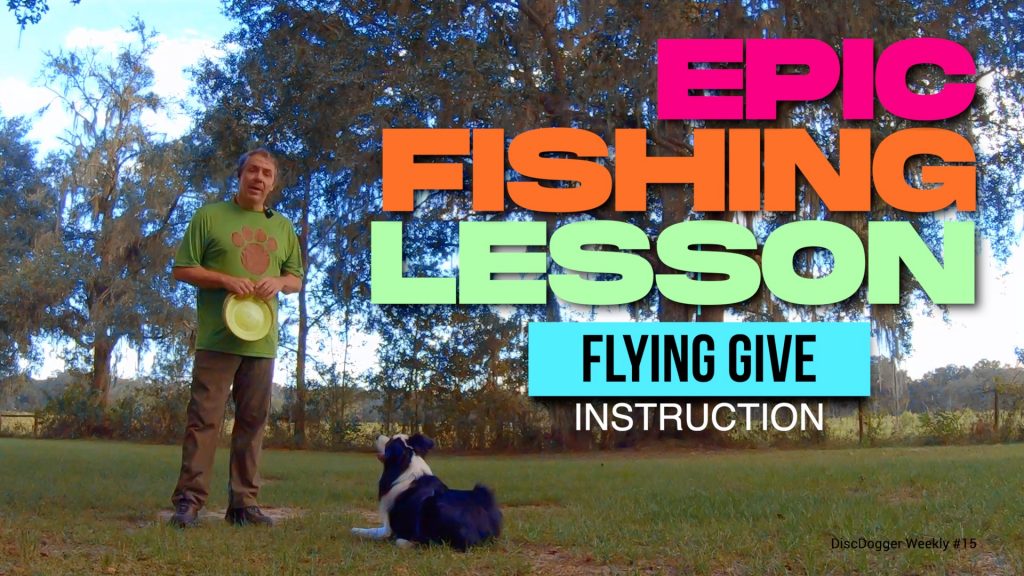 A Fish is a Flying Give. The dog is supposed to spit the disc out while in mid-air. Some dogs to it fairly naturally, and some have to be taught.

Sometimes when dogs are learning the game of bitework, they can really tear the disc out of your hand after you ask for the Give. Here’s a simple video that can be quite effective for handling this.

Ron & Loot work a Jam in a Flash sequence requested by a Disc Dog Jamming Class member. It is not very impressive, many Flash Jams are not impressive, but there is usually a lesson in there… Plenty of lessons to be had here in this seque