Flatwork with Obi, aka: “Not a Border Collie”, has been almost a weekly feature on DiscDogger Weekly. Obi is Apryl’s dog, so the videos are pretty much the only work I do with Obi, and the only freestyle training he’s been getting. Apryl runs him in toss and fetch and does some dock stuff with him. This is our 7th Team Movement training session, mainly Disc Quan Do stuff, since the beginning of August, you can watch the transformation in this playlist.

Pendulum and Setting the Flank Warm Up

This Pendulum is kind of broken, Obi has a pretty weak drop historically, and you’ve seen him bolt by the handler while getting set up for a few weeks, so it should be no surprise, really. It served as a pretty solid warm up.

Setting the Flank 4 times was great for reinforcing the Get Out and loose flatwork I planned on working in this session. It worked out quite well because I’m a splitter, not a lumper.

This part of the session was totally epic! Obi did a great job. This is probably the best he has ever dropped on cue with me. I was also pretty excited about how well he settled in to the Directional Feeding and how sensibly he started to approach the discs. I think he even leapt for a few sensibly. Good man, Obe…

Another happy moment and momentous occasion for Obi. The good cued Drop performance led directly to this successful performance of the Repeating Rear Cross. Not bad for “Not a Border Collie, eh?”

After the Repeating Rear Cross, flowing flatwork is rather easy. I think we both had quite a good time running this stuff. Such a nice performance for a dog who has, historically, been rather hard to run flatwork with.

Funny how much of an impact a half a dozen sessions of Disc Quan Do can have on a dog and team. Super exciting stuff!

Obi and I have worked the Flatwork Compass more than any other form over the last month an a half. That said, I think we have less than 10 sessions featuring it, and less than 20 total reps on the Form.

Compare the performance at the end of this video with his intro to the skill on August 2nd:

Most of the time I talk about Disc Quan Do with people, they get all overwhelmed with the workload,”Man, I got lots of stuff to work on…”

It’s just not the case, and it’s a self serving prophecy. The playlist above is, literally all the sessions I worked with Obi over the last half of the first season of DiscDogger Weekly. One per week, 7 sessions total.

It’s not a lot of work that you have to do. It’s good work with proper focus.

Well, I’ve got some bad news for ya. Toss n Fetch is not helpful for shaping & reinforcing a cued Drop. And it’s probably worse than that, it’s probably damaging to the good work you are doing on the cued Drop. Especially if you’ve got a dog that drops late. 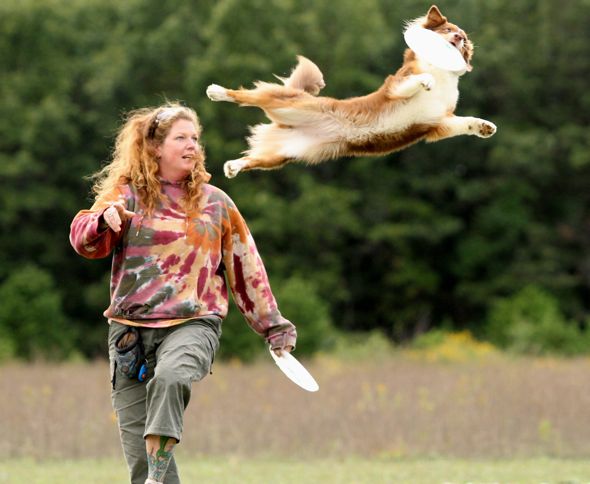 Some dogs come out of the whelping box jamming and some need to be taught. That’s the way it is. The point is that disc dog development is not a race and the sooner you stop looking at rapid development and comparing your pups development with that of another dog, the sooner you’ll be on the right page…