“Making the Play” is a simple flatwork pattern I use to work leaping and collection skills. It starts with Setting the Flank 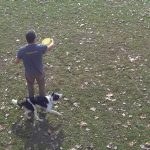 Setting the Flank means to throw out to your right or left. It’s really simple, just face any direction, send the dog Around, and then turn and throw the disc out to the, usually expanding the flank, and then working off the cued Drop to create an interception opportunity.

A Zig Zag is a series of catches in smooth succession that forces the dog to move back and forth across the field. Usually performed at a distance of 8-20 yards, the Zig.

Eppie is not a big dog and is not a particularly big leaper. He is a pretty leaper though, showcasing that sweet little Aussie tweak when things shape up properly. I would like to have that little tweaked leap on every catch.

It’s pretty, and is a thoughtful expression of a “big leap”. Big leaping is a relative term which I think many people misunderstand. Your dog doesn’t have to be a huge leaper and doesn’t need to leap HUGE on every rep.

If your dog does, that’s awesome, but not all dogs do that and not all dogs can do it. Your dog does need to leap, however. Leaping is what disc dogs do. Putting a leaping catch on the end of a throw showcases the dog’s love of the game and looks like the dog is having fun. Catches that don’t end in leaps can look like work and not have that happy disc dog exclamation point.

Changing the Dog’s Approach With Upside Down Throws

In the first few throws of warm up, you can see that Eppie is running rather hard and fast, especially on that initial lateral throw out to the flank. His leaping style is all leaned back with the head up and the rear legs low. This happens due to over-pursuit. Eppie is just running too hard after the disc and is leaping after he’s too close – he is essentially leaping so he doesn’t miss.

When I bring him across on the interception to “Make the Play”, he leaps much earlier. This leap is planned – he’s leaping to get the disc instead of leaping to not miss.

After I change to the upside down toss you should notice that Eppie approaches the disc more thoughtfully and starts to express leaping that has all four feet lifting high and starts to showcase that little Aussie tweak.

Upside Down Throws Force a Late Read and Thoughtful Approach

Throwing upside down changes the trajectory of the disc. About 5 yards before the catch, the disc flips from anhyzer to hyzer. This is novel movement and is harder to predict than a perfect, flat toss, so Eppie has to actually watch it and read it as he gets close to the catch. This attention to detail asks a dog to slow down, pay attention, and make a plan to go get that disc rather than over-pursuing and leaping to not miss.

Making the Play, creating an intentional interception, forces the dog to thoughtfully approach and plan a leap, but it is a bit too predictable. It is easy for an experienced dog to read the disc early and bumrush the target, leading to over-pursuit and that leaned back leaping style.

Adding the upside down throw creates a late read and ensures that the dog approaches thoughtfully. We can use this to counter over-pursuit and to cultivate a thoughtful approach and a plan for leaping catches.