I have been asked on more than one occasion,”How do I get a faster Retrieve from my dog in toss and fetch?”

It’s a simple answer: give your dog a reason to haul butt back to you. This simple fact often escapes handlers because we all get caught up in the game of toss and fetch – the time, the distance, and the single disc – and we go out and practice, practice, practice the game by the rules.

This is classic cart before the horse thinking and flies in the face of any kind of athletic training one can think of.

Imagine a football team that practiced only by scrimmaging (live game simulation). No walk throughs of plays, no running tires, no tackling drills, no catching drills, no practicing kickoffs and kickoff returns. This team would not be very good because they would lack many of the basic foundational skills that are required to play well and win games.

Why is it then that disc dog handlers when playing toss and fetch refuse to alter the rules of the game to teach the skills necessary for great toss and fetch performance?

Simply practicing Toss and Fetch by the rules and on the clock is not likely to lead to a faster retrieve or better Drop or Give performance.

A disc dog is sent around and then runs freely after a target that she truly desires. A wide open field is in front of her. The thrill of the catch consumes her. As soon as she makes the catch, she turns around and is greeted by what?

More often than not, she’s greeted by a handler screaming and yelling so she approaches cautiously. Why wouldn’t they?

A dog does not vigorously approach a handler that is facing them without having been taught to do so. This happens naturally for some teams, because when the dog arrives the next disc is thrown. This is sufficient reinforcement for some dogs, but it is not enough reinforcement for all dogs.

A simple recommendation for increasing the retrieve speed of a dog is to follow the throw – jog out 15-20 yards as the dog is chasing the disc – and as soon as she makes the turn back towards you after the catch, turn and run back to the line as fast as you can. Call her name as well to get her attention and to trigger the understanding and desire you have cultivated through good recall (come when called) work.

There really is no excuse for not doing this on every throw except for being lazy and stubborn. It works extremely well, providing an immediate and noticeable increase in speed while building strong teamwork in the game of toss and fetch.

There Is No Time in Dog Training

When a dog arrives at the handler she is rewarded with having her disc taken away. If there is any problem with the transfer of the disc from dog to handler, which there often is because the clock is ticking and every second counts, the dog is further rewarded with anxiety, chaos, confusion, frustration and stress. “I have no idea why she doesn’t want to get back quicker.”

Turn off the timer during practice. If time and performance are very important to you, add the timer back into the game a few weeks before the contest, after the team has an awesome mouth to hand transfer or clean drop at the feet on the playing field.

Freeshaping the drop is a great tool for obtaining a great drop at the handler. It takes the pressure off the Give and allows the dog, and the dog’s behavior to be in control over reinforcement and the pace of the game.

Some people consider this sacrilege or blasphemy in Toss and Fetch. I mean, it violates everything that the game is about.

There are several legitimate reasons to be wary of adding another disc, but they wither upon further inspection. Let’s look at one of them in particular, it’s by far the most frequent reason for not practicing toss and fetch with multiple discs:

“If I use two discs the dog will never play with just 1.” This fallacy is shattered when thinking of getting rid of cookies in dog training – do you have to have a cookie to get your dog to sit? How about using a partner to teach a dog to vault?

I think the main reason that people make this excuse for not using two discs is that they believe Toss and Fetch is easy and should be an expected skill and that using another disc would be cheating. How’s that working out for ya?

Adding another disc gives the handler more control over reinforcing the dog. In the case of freeshaping a drop, it allows the handler to immediately reinforce the dog for a solid drop – no more fighting over the disc on the ground and instant reinforcement with a throw.

It also allows the handler to perform two key skills that will develop a faster retrieve.

We’ll talk about those in the next installment. 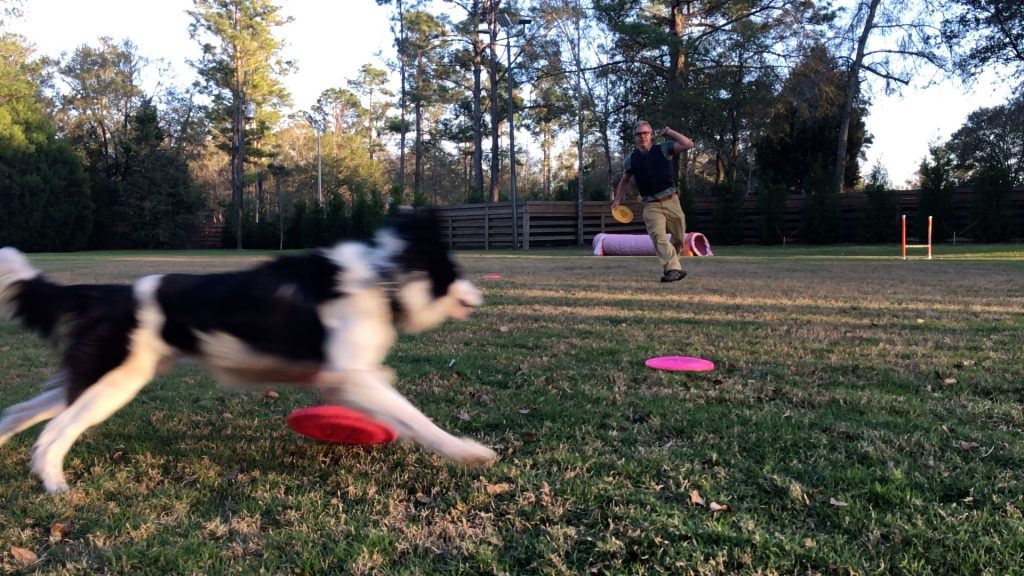 In routine building handlers are often putting the cart before the horse. I’ve built more than a few routines in my time. I’ve drawn detailed diagrams, written lists with wind modifiers, grouped my sequences, made physical models of the routine – all of these things have been helpful to some degree. But they were, more often than not, putting the cart before the horse.

Improving Your Disc Dog's Retrieve Speed in Toss and Fetch