We have covered this before on the Cued Drop 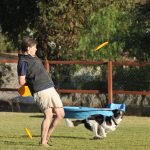 A cued Drop, or Drop for short, means that you tell your dog when to drop, purposefully, and upon your discretion. A cued Drop is a must in the game of disc in topic. Sometimes your dog learns to drop on a cue that you never intended to teach. In Loot’s case, the unintentional Drop cue happens when I pass or load the disc from the stack in my off hand to my throwing hand.

This loading of the discs, which is unintended for me is the intended cue from Yachi MethodA Disc Dog handling system practiced by the Japanese USDDN contingent, developed by Yachi Hirai with the spirit and influence of Melissa Heeter and Pam Martin.  . And it’s a good one. It works. It is a bit limiting though and is not a good fit for me or for people who would like to have a bit more control over where and when the drop happens and how and when they load their discs.

This unintentional cue really snuck up on us too. I didn’t even know it was happening. It is extremely easy to miss unintentional Drop cues and to believe that it really is your intended cue making the move happen. I identified it a year or two ago and have done a bit of work with it but never finished up that work and have chosen to work around it. And that is a valid choice.

You do not have to fix an unintentional cue. It is possible to avoid it or use it to your advantage.

Changing Cues With a Prompt Switch

So let’s say your dog doesn’t drop or drops late. But the Drop happens on an unintentional cue, let’s say the passing of the discs from the off hand to the throwing hand, as is happening with Loot.

Once I have identified the cue that works (loading the discs) I can put the cue that doesn’t work or is weak or latent, directly before it. So I will cue “Aus” and then immediately load my disc. The weak cue (verbal) will predict the strong cue (loading of discs) and will become paired with it.

After a few hundred reps, the cues will become synonymous, and the dog will start to drop the disc before the strong, unintentional cue (loading of the discs) has begun. Once that is happening you can simply use your desired cue.

Getting rid of the unintentional Drop cue with Loot is a multi-part process, and the Prompt SwitchA Prompt Switch is a technique for changing the cue or signal for a behavior. The new/weak cue is given, verbally or physically followed immediately by the old/strong cue. Then the behavior happens. is no longer relevant with our work. That said, using a Prompt Switch is key for people who have a dog that doesn’t drop on your intended cue but drops elsewhere.

The Prompt Switch is a classical conditioning exercise. You are not rewarding the behavior after it has been successfully done, you are using the pairing of an unintended cue that works to create a cue that works. You are making a conditioned stimulus.

This is not the same as paying a dog for doing something or rewarding a behavior. The pairing of the cues is key. If you move to operant conditioning too quickly by waiting until the dog has dropped before giving the unintentional cue, you will reinforce that unintentional cue and turn the new cue into inconsequent noise.

Get Classical THEN Go Consequent

It is very important to keep these things separate when working with a Prompt Switch until the dog is dropping on the new or intended cue. This will take many repetitions to become solid. Do the work. Do at least 100 reps of pairing your intended cue and the unintended cue, taking care that the weak cue (the one that doesn’t work) happens before the strong one (the one that works).

Once the dog is dropping on your intended cue before you give the unintended cue, simply stop offering the unintended cue. MarkShort for “Positive Marker”, a Mark is a word or signal given at the exact moment a desired behavior is performed. It’s like a clicker. Mark can also mean the act of marking and reinforce like normal training.

I will have to teach him that the loading of the discs without the Aus is like getting a command without Simon Says in front of it.

Hopefully we can get some footage of those lessons in the future.