sometimes dogs learn the funniest things. like Viper here… he thinks the object of the game is to pick up the disc off the ground. unlearning that and teaching a catch can be a tough job. here’s a session from a recent disc dog camp on solving this problem.

Jaimie & Viper came to disc dog camp over the New Year down in Florida. She has a fleet of awesome dogs that do a great job working with their handler. Before camp she told me that she had a dog who couldn’t catch that she wanted me to take a look at. I was pretty excited, as I thought we might get a chance to fix a real common problem live at camp and also on video. Well, here it is…

Viper is a super bright, perhaps too bright, border collie. He pattern trains really, really fast. You can see it here in this video. These dogs are sometimes quite difficult to deal with. Jaimie calls Viper “Special”. Somewhere along the line, Viper got the idea that catching the disc was about picking it up off the ground, so Viper either knocked it down or waited for it to drop.

I wish there was more video to show the problem, it was super obvious that Viper did not understand the criteria of catching a moving target. It must have given Jaimie more than a few grey hairs. Fixing this problem can be maddening. Here’s how I went about solving this issue, it’s a pretty standard method of operation for us here at Pawsitive Vybe.

The problem here with Viper, and it’s a common one, is that he believes that the object is to pick the disc up off the ground. The criteria of teeth on, or bite the disc, while moving is just not installed.

Shaping the catch requires breaking down the bite/catch behavior into more component parts and to soften up our criteria so that the dog can hit it. If you split up the catch of a disc up into smaller, bite sized behavioral pieces, you can find some criteria that can be used to shape this catching behavior:
Attention
Targeting
Chase
Track
Arrive
Target
Bite
…or something like that.

Now where is the problem going wrong with the dog? In Viper’s case, he has a problem from tracking the disc to the catch – he readily gives attention to the handler, he totally targets the disc and engages in chase, but he loses track of the disc and has a late arrival on the downed disc and then he bites.

Focusing in on the tracking and biting behavior is a good place to start, so my initial roller at 0:55 of the video was an assessment of how well the dog did on those last three pieces of behavior – track, arrive, bite. He actually tracked the roller, arrived at the target and tried to put a bite on the disc – he missed, but he reflexively captured the disc with the bite on the second attempt. I marked that, that’s the criteria I’m looking for.

Yup, the dog missed initially, and you can hear Jamie chuckle a bit. Well he hit it on the second attempt and clamped those teeth right down on the target for the catch.

I set the criteria at the catch of a moving Roller right off the bat – I could have used ‘teeth on’ or an attempt at catching but I think that’s what started the problem in the first place. He puts his teeth on and he attempts to catch, but that’s about it, and that’s a learned behavior. It’s super important to step up your criteria when teaching skills, too much time, too much or inadvertant focus on the ‘attempted’ bite can be really troublesome, as Viper is most likely a testament to.

The Positive Marker is absolutely critical tool for solving problems in the game of disc. The game moves so fast that without a marker it’s all just a blur – “Who the hell knows what we did back there, but it was cool!”.

The Positive Marker allows you to separate the tipped disc from the caught disc, to reinforce, precisely, the teeth off part of the cued Drop, and it allows you to hop from success to success. In Viper & Jaimie’s case, marking the cued Drop helps the dog seal the deal on the catch because he is not going to let his cookie get away.

If your dog is having problems catching, the very first thing you want to do is to mark both the catch and the cued Drop.

Once you’ve marked the catch of the disc it’s time to reinforce, and here’s another place where people have issues – practically and philosophically.

I’m reinforcing with Energy Levels of the game and also with Next. The disc is only a vehicle for that reinforcement.

My criteria for earning a positive marker are: Bite, cued Drop, and Attention. I’ll also mix in some team movement or cues from the handler. Any time the dog Bites the disc, drops on cue, offers Attention, or follows my cue, I’m going to mark and reinforce with more exciting play. This allows me to hop from success to success with the cookie being more success.

When the dog does not comply with a cue, or misses the criteria, I’ll draw down the energy level of the game as negative punishment. You can see a few instances of me drawing down the game or killing it in the video above. Do that consequently and you’ve got a really powerful cookie that you can turn on or turn off at a moment’s notice. 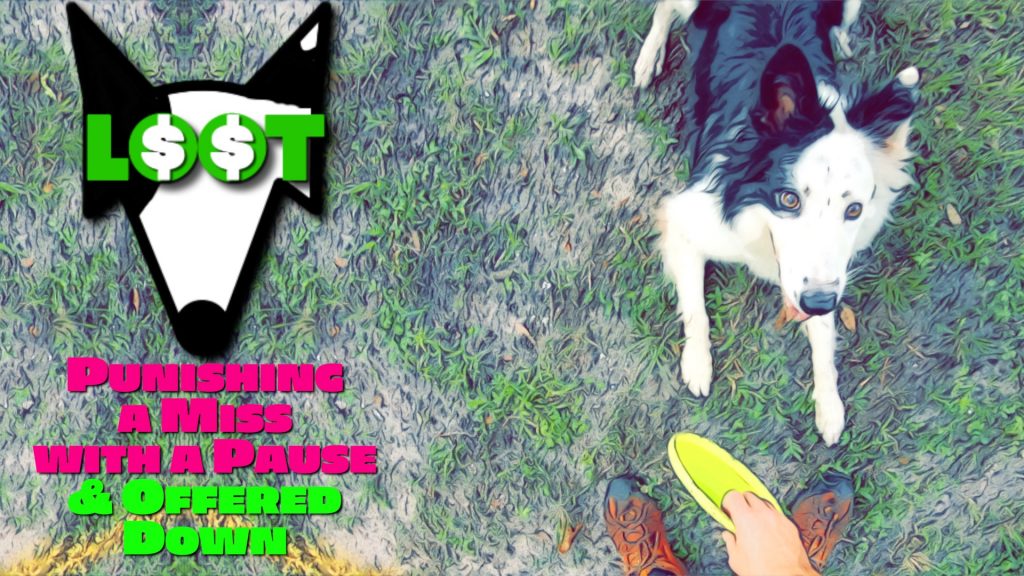 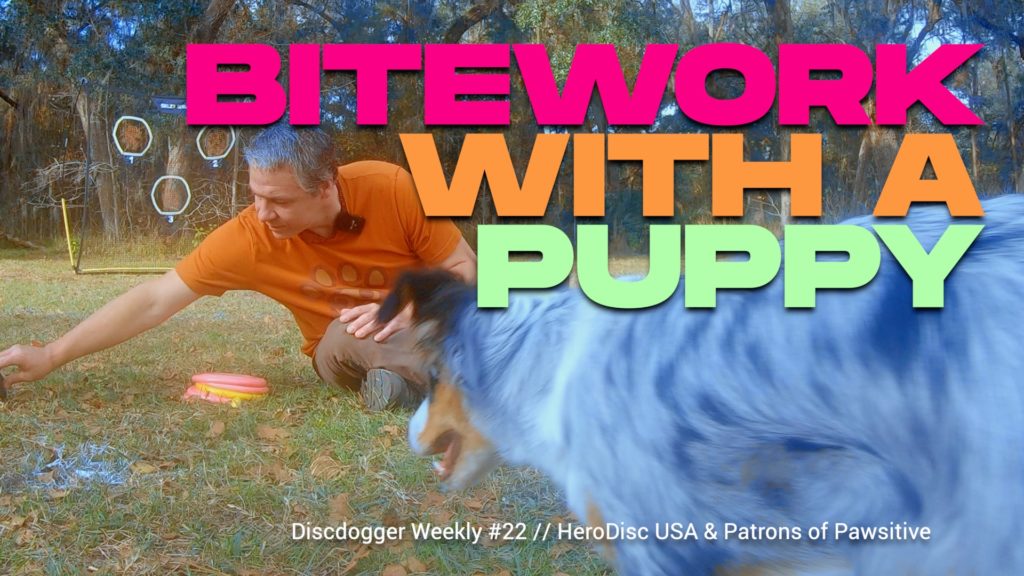 Bitework is a tremendous exercise for teaching dogs to play disc. Bite, Drop, Give, Drive Management, Patience, Position, and catching can all be taught and reinforced using a thoughtful game of Bitework. Ron & Wham! work some Bitework and demonstrate some of the basic functions of the game. 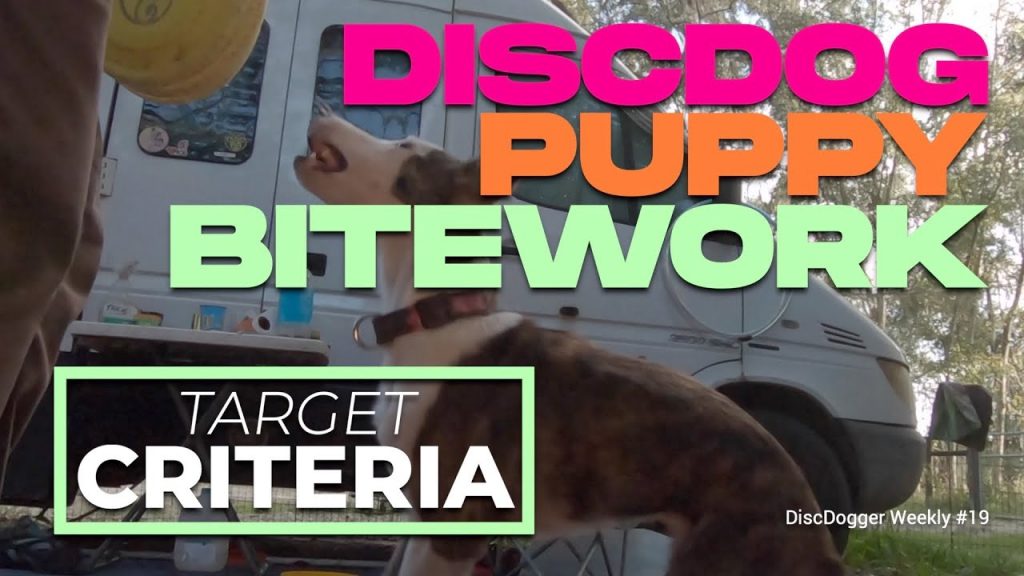 Disc Dog Bitework is a great way to teach the mechanics of disc play: Bite, Drop, and Give. Each of these skills is integral to the game of disc with a dog whether you’re playing freestyle or focused on disc dog games. Ron & Grasshopper work a little bitework in this short session with a focus on drawing attention to the Bite and Drop criteria and the trigger for a Bite. 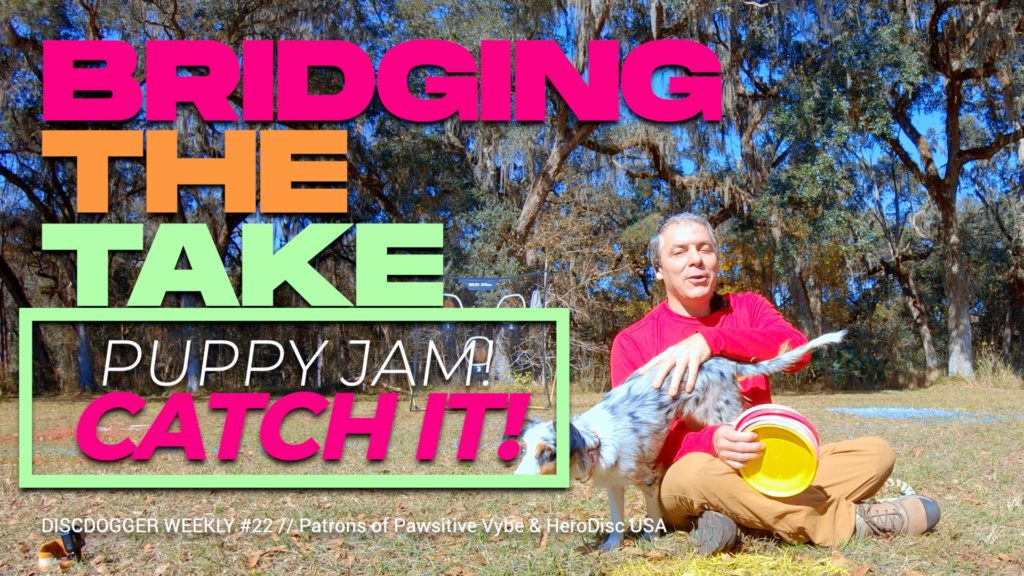 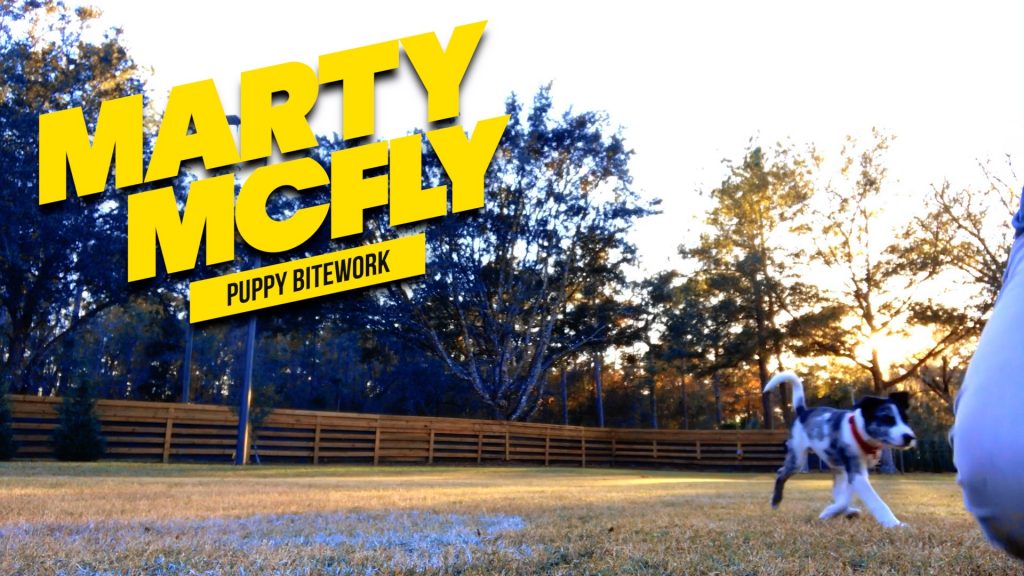 Let’s go Back to the Future with Apryl Lea & Marty McFly from 2017. In one of Marty’s first field jams, Apryl and the young man work on staying engaged and freeshaping the Drop.